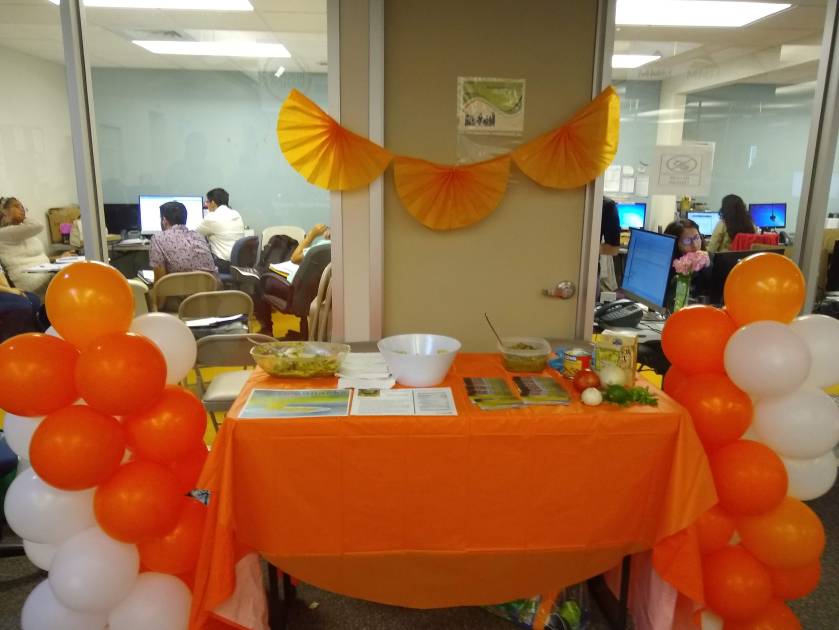 It’s been a while since I had this rotation. But, since I promised, here’s what I remember. I think in every internship there’s talk about superiors. For us nutrition interns, we have preceptors which are dietitian nutritionists that supervise us during different rotations. For this rotation, our preceptor was quite infamous. We’d gone to an orientation for the company back in August where she said hardly two words. Instead, she sat stoically observing every single one of us in the room. It was intimidating.

Especially, since she had this sort of style to her. Sharp, slick, intensely red bob haircut, pressed, professional dress, and a stern expression that could only say, “I am a working professional, but whatever you do, don’t slack off and do not cross me.”

The ten of us interns were paired up in August in order to complete the 20+ rotations required to complete the internship and be eligible to take our licensure exam. By the time my internship partner, Gia, and I went to Telemedicine, only one pair had gone before us. That pair warned us that this preceptor was intimidating, yet super nice to your face, but would screw you over in the evaluation. (In order to pass the rotations interns must get at least an 80% in evaluations.) Yikes!

Well, our first day wasn’t bad. She was super nice and offered to help in anything she could, but I’d been warned, so I didn’t believe any of it. The first day we were also given a surprise photoshoot. Well, just one photo, but gosh, you could warn a girl! To make things worse, this photo would be used on the cover of a company newsletter (for an article we were assigned to write). Other than that, we spent most of the time smiling at all of the medical professionals (mostly nurses and social workers) who our preceptor introduced us to.

As a side note, Gia and I were both pretty discouraged and, I dare say, depressed. Remember that the rotation we’d had the week before had been Intensive Care Unit (ICU) where we were judged for being American and didn’t do so hot in our evaluations. (Read about that rotation here.) Well, we hardly said a word. Most of the week we spent it in silence. Quietly working on our assignments. We made a brochure, wrote a newsletter article, created a recipe for guacamole, analyzed the recipe’s nutritional content, blah blah, so much work.

One day, we also called patients over the phone to give them nutritional interventions. It wasn’t that bad. We had a script to follow and only had to break from that was when people told us what they usually eat in a day. After that, we’d say something along the lines of, “well I notice you tend to eat lots of fruits but what about vegetables” or “I notice you enjoy processed foods in your daily diet, remember that processed foods often have a lot of sodium added which can raise your blood pressure”. You know, stuff like that.

The real exciting part of this week was the food taste testing! For this, Gia and I came up with a simple guacamole recipe. One day the preceptor took us to a little vegetable stand where we bought most of the ingredients and, since she had stressed decoration, to the dollar store and a party store. I went wild with that! I mean, I like nutrition enough, but…. Decorating and crafts and fun! I got a tablecloth, some tissue paper, and balloons! Ahh! I was excited.

On the day of the event we loaded things into our preceptor’s van and I will tell you, I have no idea how I got the measurements right, but the balloon columns I made fit perfectly! I loved the experience. It was a huge room crammed with people wearing headsets in front of computers. Hundreds of cubicles. Whenever people had a minute, they’d wander to our bright orange table (featured picture above) to get some chips and guacamole. Since Puerto Rican cuisine isn’t known for spicy foods, we made a bowl of guacamole without chili and a smaller bowl with. I enjoyed sneaking in more chili whenever the preceptor wasn’t looking to really give the brave people who asked for it a kick. Hee hee!

Too soon though, it was over, and we were packing up to leave. At the last moment though, the people who had come for a sample several times asked if they could have the guacamole we had left over if they brought us a bowl or container. They took all of it! Woo! That is what I call a successful taste testing!

The next day, it was time to go do a patient home visit. Apart from phone health services, this company also offers home visits from nurses, therapists, social workers, and dietitians to patients with certain health problems like uncontrolled hypertension or diabetes. Our patient was disabled, so when we arrived at his home and found he was by himself (thus could not get up to open the locked door for us) we had to return to the company. I was a bit apprehensive since I’d never done a home visit and Gia and I were supposed to be the ones who would carry out the evaluation. Sooo, I didn’t mind too much when we lost that opportunity.

The only thing left to do was our evaluations. The preceptor took us into a closed room one at a time. I was first. Nervous, since I’d heard she was a tough evaluator from the previous pair, I sat in front of her flame red hair and piercing eyes. But she was kind. She told me she hoped I’d speak more and interact with other health professionals more. She also commented on my subpar grammar (everything we turned in was in Spanish and most things I turned in in such a rush that the grammar would have been equally as bad in English…).

I felt at ease with her. I asked her what I could do to improve my professional appearance as about 90% of my preceptors before her had commented I needed improvement on that but hadn’t explained what specifically I needed to improve. She told me, my make up and hair was impeccable but that on the first day my uniform was wrinkled and that first impressions are important. Good, I told her. I explained that every week I felt like I put more and more junk on my face and as a person who usually never wears make up, I was desperate to find a stopping point. Alright, so foundation, eyeshadow, mascara, blush, and eyebrow powder was enough. Phew!

She admitted she wasn’t very into make up herself. But that that’s the culture here. She had also told us she was rather shy when she did her nutrition internship. She said she’d seen that excited spark of my personality when I talked about the decorations I planned and during the taste testing and that I should allow myself to be open and sociable like that more often. She gave me goals to work for and (I believe) honestly and wholeheartedly wished to see me grow from this internship. My heart was restored. It’d been so long since I felt someone, especially a preceptor had seen me and encouraged me. I needed a preceptor like her.

Hopes for the Future

I hope to visit her towards the end of the internship and show her how much I’ve grown. I want to make her proud. She was the first nudge to get me out of that depression I was in. The next was a shove directly from the director of my internship program. Come back next Friday to read about Thanksgiving break 2018.

That week wasn’t relaxing. It included meeting an eccentric Uber driver in a sports car, getting pulled into a meeting with my internship director where she told me I had disrespected her, and a makeshift Thanksgiving dinner with Gia and Karen. (The most fun part of the week being meeting the Uber driver, of course. 😉)