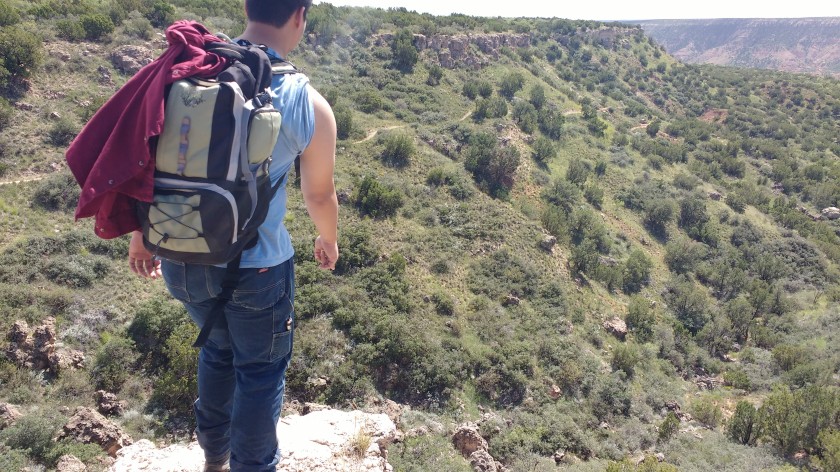 I have something special for you guys today. It’s a story I wrote for a creative writing class back in in 2015 or 2016. I’d never attempted a short story before. In fact, this was before I began blogging, so it’s the first narrative I’m proud of. Not so much for the writing skills, but more so for the twisted message. Enjoy?

“Jump!” he screamed, hurling himself from the precipice.

I, unprepared, stumbled a few steps before tripping after him. I jumped, kind of. “Why did I jump?” I wondered as I flew down the mountain close enough to it that had I not been hugging my arms to my chest I would have sanded myself on the way down. “You meet a nice guy and next thing you know you’ve jumped off a mountain.”

On one of my morning runs, I met Jimmy. His father owned the grocery store in town that I typically passed. For several days I had seen a figure lurking in the shadows of the brilliant pink and orange sky of dawn. The figure was the size of a young man. Short and wispy, but with a sort of strength to it I could see from the path. There he stood, leaning against the door of the shed his father used to store inventory. I saw him there every day for a month.

In June, after six weeks of living in town, I passed the solitary dirt path and glanced over to the shed about twenty feet into the property. No one was there. I couldn’t help but feel a bit disappointed. Since I had moved in, I had met several kind people, but it seemed as if everyone had already found their niche. The farmers’ wives chattered away when they found the time, the mothers regularly met up to exchange gossip, and the men, I had heard from a little girl who had wandered to my house one evening, sometimes met up for a night of card playing in someone’s basement. The women of the house would be ushered upstairs and only be allowed down if they brought food or refreshments.  What a strange place. It was like traveling back in time.

Lost in my thoughts, I had not heard him running beside me. A light tap on the shoulder brought me back into the present moment. Startled, I jumped, then took off in a sprint. He looked ahead, a few steps behind now, and began to laugh. Curious, I looked back.

“If you didn’t mean to scare me you shouldn’t have snuck up on me!” I said, irritated that I had jumped like a jackrabbit at the first sign of danger. “Yeah, I’m Alice. Who are you?” I replied with a scowl.

As if he didn’t hear the annoyance in my voice, he replied, “Jimmy.” He had caught up to me with those sluggish steps of his.

I looked him over, wondering if he would say more. When he didn’t, I invited him to walk with me. We walked until lunch time, him talking about the past and me talking about the future. At the time to depart, he walked to his house for lunch with his family and I walked home for lunch alone. After that day, I wasn’t alone much anymore. Jimmy and I would walk in the mornings, then go to his place for lunch. His family all seemed to enjoy my company and I loved theirs.

This morning we took a new path, to the mountains at a distance.

“You still haven’t told me why you moved here you know,” he began.

He’d asked me several times, but I would always make up some excuse to avoid the question. One time, the fish we caught in the river just happened to get knocked out of the bucket we’d put them in. Another time, I tripped out of nowhere, scraping my knee. Now, I regarded him. It’d been two months since he’d last asked me.

“You haven’t figured it out yet?”

“No, for all I know you moved out here to escape from a flesh eating disease killing off city dwellers.”

“How’d you know?” I said with false surprise. “The disease doesn’t eat your skin though. It eats your soul.”

“It’s greed, desire, selfishness. I wanted to get away from it.”

“You can’t get away from that Allie! That stuff is in the air!” He shook his head, as if to rid himself of my foolishness.

The mountain air became louder, more forceful as we reached the base of the dry, rocky mountain.

I was glad we had reached the mountain. Now we’d be even more alone. Only nature balances out human folly. The rest of the climb we spoke about lighter subjects. His sister had recently had her first child, so I gushed about her for most of the hike. When we reached the top no one spoke. The silence coated us like frosting on a cake, beautifying the moment.

As far as I could see were blue skies. Not a single cloud lingered. Even the dull gray rocks below us seemed to shimmer. The peak was flat and wide, so we sat and looked at the eagles soaring past. What seemed like hours later, Jimmy took my hand and led me to the edge. Afraid of heights, I hung back. He let go and stood with the tip of his boots over the edge.

“Of course.” I replied solemnly, unsure of where this conversation was headed.

“Jump!” he screamed, hurling himself from the precipice.

So I jumped. Not knowing where it would lead, only trusting him, I jumped. It was terrifying. First you feel nothing, then your stomach lurches into your throat and your heart flutters as if trying to take flight and save you. Several endless minutes of abdominal clenching later (as if that could stabilize the air whooshing around you), the body begins to recognize this new speed and direction as normal. Your body releases its tension and it feels like flowing through a lazy river. It feels safe and natural.

I know this isn’t natural or safe, so while my body has calmed down and accepted its fate, my mind goes into overdrive and begins scrambling for ideas. I open my eyes. When had I closed them? Rocks and only rocks surround me. Jimmy! Where is he? If two objects fall at the same time, they will reach the ground at the same time regardless of weight. I jumped a few seconds after him, so he shouldn’t be too far below me. I never would have guessed physics would be one of the last things I thought about before I died. Then again, I didn’t think I’d die by jumping off a mountain at the request of my best friend.

There, about three seconds below me, is Jimmy. His eyes are closed. He looks completely peaceful. My brain begins to slow.

Suddenly, he opens his eyes and yells, “No more human strife!”

“What?” I think, my mind going wild once again. I see him splat on the grassy valley. His limbs are bent every which way, but his eyes are open and he smiles at me as I join him.

Our weekly bowling day somehow ended up landing on national girlfriend day. 😅 How appropriate!
Went to a murder mystery dinner with Savvie! 🥰 She put on this gorgeous dress, so I just had to dress up to match her.
I love taking "stalker" photos of my girlfriend 🥰 She just looked so cool waiting for her turn to bowl that I couldn't help it
Spent the weekend with some of my favorite people! I had a blast exploring our big town/small city, bowling, walking around the lake, and even just watching movies on our tiny couch. Thanks for visiting! 🥰
Caught Savannah laughing at a super lame joke of mine during date night yesterday and she caught me admiring her after getting haircuts today. 🥰
My girlfriend and I on a date night a couple weeks ago. ....I may have asked her to dress up like a school girl 😅 I regret nothing!
%d bloggers like this: